Paintball is a popular recreational sport. The aim of the game is to eliminate opponents by hitting them with paintballs that contain a water-soluble dye. The guns used to shoot paintballs have also been used by the military and diverse law enforcement agencies for training purposes.

A Brief History of Paintball Guns

Paintball guns or markers date back to the 1960s when the Nelson Paint Company developed paintballs. Shortly thereafter, the Nelson Paint Company contracted several air gun makers including Crosman to manufacture a gun that could shoot their paintballs. However, the resulting paintball guns were used to shoot paintballs to mark cattle and not for recreational purposes. In 1981, three friends, Charles Gaines, Hayes Noel, and Robert Gurnsey came up with the idea of developing paintball guns that they could use for recreational purposes after seeing an ad featuring the Nelson Paint Company's firearms. They soon turned their idea into reality and the first paintball game was played on June 7, 1981 in the woods of New Hampshire. In the same year, Sports Illustrated writer Bob Jones penned an article that appeared in the magazine's October issue. Time Magazine and Sports Afield also published paintball features ramping up interest in the new game. As a result, enthusiasts started writing to Gaines, Noel, and Gurnsey asking how to play the game. Seeing a business opportunity, the three friends wrote a rule book they called the National Survival Game (NSG). Since then, this game has grown into a global industry that generates billions of dollars annually from sales of paintball gun, paintballs, and safety gear such as paintball goggles. 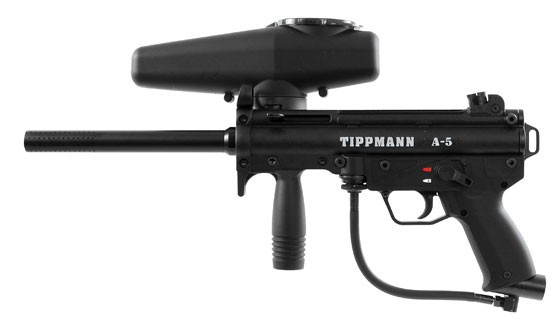 This is one of the most popular paintball markers ever released. Featuring an aluminum body, this marker is highly durable and can be fully customized.

A 5th generation paintball gun that might be the best on the market.  This mid range market uses best in class materials to enhance the grip and feel of the gun and won't let you down if you need to throw some serious paint on at the other team.  You can't go wrong with the Eclipse Etek 5.

This paintball marker is molded along the lines of a real gun and boasts of features such as a grip frame and semi-auto to fully automatic firing option. In spite of these features, the BT Delta is light and easy to carry.

The Cronus isn't the most expensive paintball gun or the most advanced.  It has a very simple yet reliable design and is a favorite of many avid paintballers.  Most people that use a Cronus will have it modified with accessories.

Mechanical markers are the most common and rely on compressed air to fire paintballs. Although they are semi-automatic, they are affordable, easy to fire, and easy to maintain.

These paintball guns are powered by rechargeable batteries and have higher firing rates compared to non-electronic markers.

There are hundreds of companies that make Paintball Guns, Equipment and Gear.  When you look at spending money on your paintball hobby you should make sure that the bulk of your budget is used on your Paintball Gun.  This is where the most innovation comes into play and spending a bit more on a higher quality gun can really increase your overall experience with the sport.  Most guns fall into the following ranges:

Top Tier or Professional Paintball Guns - $600 and up

Most of the major manufactures will have variations of guns that fall into these price ranges. As with anything else, the more you spend the more features and functions the guns will have.  The best thing to do is pick your budget and do your research on what is important to you and the types of games you will be playing.

Although the Nelson Pain Company played a key role in the development of paintball markers in the 1960s, Gaines and his friends commercialized them in the 1980s. Some popular models include Dye DAM, Dye DM14, and BT TM 15. The most common types of paintball guns are electronic and mechanical.