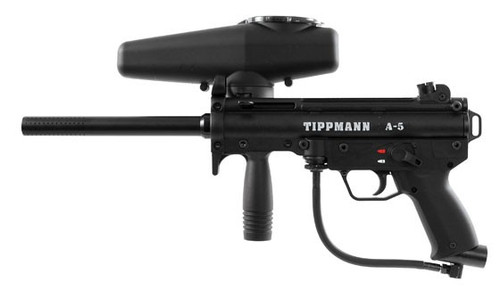 Since its launch back in 2002, more than a half-million players have turned to the Tippmann A-5 - one of the most popular scenario markers in the industry featuring the patented Cyclone Feed System and the ability to field strip in less than 60 seconds. Over this time, the A-5 has also developed into one of the most customizable paintball markers available with hundreds of upgrades and modifications to choose from. Tippmann is excited to announce that this popular marker is even better. The redesigned A-5 incorporates ten new enhancements while maintaining the overall aesthetic appearance that paintball players have enjoyed for years. Before incorporating any changes into the A-5, Tippmann sought input from thousands of players as well as its R&D team, lead by Denny Tippmann, Jr. The result is an improved marker, which is even more reliable, accurate and easier to upgrade. Some of the key changes players asked for include: an improved Cyclone Feed System that reduces ball breakage in a variety of weather conditions, better accuracy, a more ergonomic feel, reduced marker noise, and greater air efficiency. Players also asked for some of the features found on Tippmann's X7 marker, including its low profile hopper and external selector switch. However, they also stressed the importance of maintaining the many great features that make the A-5 platform so popular, including its Cyclone Feed System, which feeds up to 15 balls-per-seconds without batteries, its push-pin design for quick field stripping, and the ability to use exiting mods.

The result is a newly-enhanced Tippmann A-5 that incorporates the following ten upgrades:

1.New Cyclone Feed System - improved paddle design and connection point is easier on paint and reduces the 'popcorn' effect, making the Cyclone more reliable in a variety of weather conditions

3.New Larger Front Grip - new longer front grip has a better feel and incorporates a front tang so, when removed, upgrades are easier to add to the lower portion of the receiver

7.New Tombstone Connections - marker maintenance is now faster and easier than ever

This product hasn't received any reviews yet. Be the first to review this product!